The Bloody Benders of Labette County ~ a TRUE Ghost Story!

I wrote this years ago for Halloween and I keep recycling it every year. This post also gets more views (from all over the world) than anything else I’ve ever written. I did quite a bit of research for this piece. I wish I had listed my sources at the time. Be assured that this story is as accurate as any you’ll find about the Benders. ~ sekanblogger

The old Bender property is haunted. A mere decade after the gruesome killings, nothing was left of the cabin and outbuildings on the property, the only thing that remained — an empty hole that had once been the cellar, has long been filled in. From these depths come the souls of those murdered on the site, wandering about the property and making moaning sounds that can be heard by any passersby. Of those most often reporting seeing glowing apparitions on the property are those who come to the site in search of some long lost souvenir of the grisly murders. Quickly, the scavengers are frightened away by the dead souls to spread their ghostly tales.

As the legend of the haunting continues, people say that Kate Bender, herself, returns to the property, doomed to roam the land where she had committed so many atrocities. Whether folklore or fact, many believe that the trapped souls of these century-old ghosts continue to lurk at the site today, looking for the cabin, well, and shallow graves they were left in. Of those who were mistaken for the Bender family, and murdered by vigilantes, they continue to roam Southeast Kansas, seeking revenge! The old Bender property is approximately 10 miles west of Parsons Kansas. 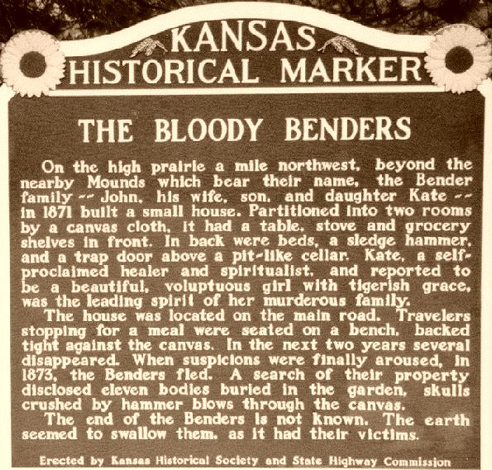 Through the Treaty of 1870, the Federal Government moved the Osage Indian tribe out of the state of Kansas completely and finally. The Osage defense of the best of their territory had become impossible, due to a flood of European immigrants. Prior to 1870, the immigrants were entirely illegal, but the State refused to accept that fact, while the Federal Government simply turned a blind eye. The Osage had been promised the land, literally “As long as the wind blows and the grass grows.” This was the actual wording in one of the treaties. However, the Osage saw the future, and had capitulated long before 1870, in heart and mind, if not in writing. One well used Osage trail led from Ft. Scott Kansas, to Independence Kansas. It was mid-point along this stretch of trail, near a mound that still bears the name “Bender’s Mound”, that our sordid story ensues.

The landmark known as "Bender's Mound"

At about the same time, and just a few miles from the now famous Ingalls family (Little House On The Prarie), a family of Germans, consisting of four persons – a man, his wife, son and daughter – moved into southeast Kansas, at Osage township. The man was known as William or John Bender, the son and daughter as John Jr. and Kate. In reality, none of them were named Bender, and the woman and daughter were the only ones actually related. END_OF_DOCUMENT_TOKEN_TO_BE_REPLACED

Be sure to visit KATY DAYS  for more area history. 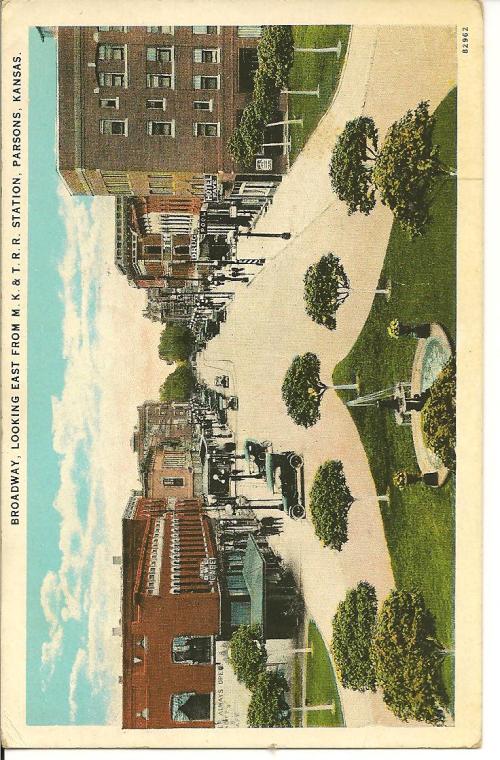 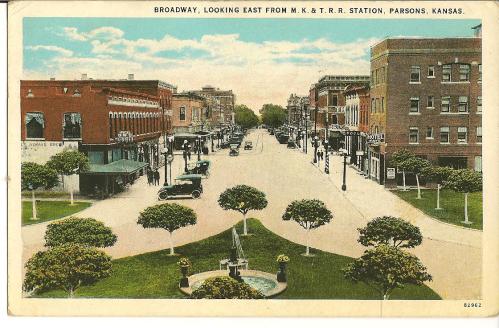 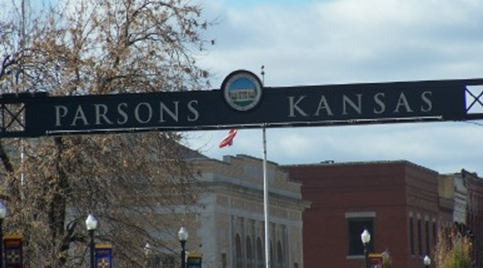 Bob, thanks for all the information! – sekanblogger

Current makeup of board and their particular expertise –

President – Pat LaForge – President of Laforge and Budd Construction – Valuable contributor to the group because of knowledge of construction and it’s costs, as well as being a large employer in the area. LaForge and Budd has partnered with JOBS and the City in the past in the construction of “spec” industrial buildings to have in inventory for the attraction of new industry. LaForge and Budd was also a major contributor of funds in the initial fundraising effort. Pat also serves as a director on the Parsons Community Foundation.

Vice President – Bob Wood – President of Wood-Dulohery Insurance, Inc, and Wood-Dulohery Real Estate (formerly Seaton-Wood) – Involved in Economic Development efforts in Parsons for over 20 years. Currently serving as Vice Chair of the Great Plains Development Authority, and a founding member of the effort for the transfer of the KAAP property, Served as Co-Chairman of the Redevelopment Task Force formed in the aftermath of the Tornado, and led redevelopment efforts for the downtown renovation, Served as co-chairman of the bond issue campaign for renovation of Parsons Middle School, led task force on two occasions to oppose closure of PSHTC, past President and long term director of Parsons Chamber of Commerce, and founding board member of Downtown Parsons, Inc. Has direct involvement with outside prospects as they tour the community for site selection, as well as explaining housing options for owners and employees that would relocate to Parsons.

Treasurer – Ray Jacquinot, Vice President of Commercial Bank – One of the more recent additions to the board, taking over for Phil Eaton, who had served since the beginning. The local banks need to have a strong presence in this group, as they have come to the table with many “joint venture” funding vehicles for projects in the past. One of the local banks will act as “lead lender”, but all of the institutions involved share in the risk of a loan. Loans have been made to construct buildings, buy property, or simply operational funding to assist companies create more jobs. Commercial Bank was a major contributor in the original JOBS fund drive.

Secretary – Bob Bartelli. Bob is the only founding member of the JOBS board that still serves on the board. He, along with Dick Dearth, Jerry Carson, Chuck Brown, Gary Seaton and a few others that I’m sure I’m forgetting, were the leaders that came up with the idea of JOBS and had the drive to organize and solicit the funding needed to make it work. Gary Seaton was an original board member of JOBS and the firm was a major contributor of funding for JOBS, Inc. It’s hard to go ask your friends to donate $5,000, $10,000, even $20,000 to a cause like this, but they did it and raised almost $700,000. Bob has the experience of all decisions made in the past about JOBS activities, as well as knowledge of the city’s economic development strategies as they relate to a local business that needs help expanding, or just maintaining, as well as new prospective companies that may want to locate here. It is important to have this tie in, because there are some things that the city just can’t do, and that is where an entity like JOBS becomes valuable in the process.

Director – Montie Taylor – President of Great Southern Bank, Parsons – Montie has been a long term member of this board, and his bank has been involved in many positive ventures, as noted above, to help provide jobs. Montie serves as a Trustee of LCC, and as a director of the GPDA. There aren’t many volunteer organizations in Parsons that he hasn’t been involved with in some capacity. The First National Bank was a major contributor to the initial JOBS effort.

Director – Ann Charles – Deputy Director of GPDA- Past editor and publisher of Parsons Sun –Ann has been heavily involved in all things around Parsons for some time. During her time at the paper, she became very involved in the political systems, both on a statewide and national basis. She can pick up the phone and have a conversation with the Governor, or any of our Senators or Reps in DC. She was very involved in the last comprehensive highway plan that led to the construction of HWY 400. Transportation is very important in economic development decisions, and having the right contacts in Topeka and Washington help. It is also very important that the efforts of the GPDA align with the activities of the city’s eco devo department, and the efforts of JOBS, to make sure that everyone is moving in the same direction, and not duplicating efforts. The Parsons Sun was a major contributor to the initial effort.

Director – Rich Proehl – See above about financial and political. Rich covers both. Vice President of Labette Bank, and current State Representative. Labette has been involved in the joint ventures mentioned above and was a contributor in the initial effort.

Director – George Knox – President LCC – The president of the college has always had a seat on the board. Any issues regarding workforce training can involve the college, and assistance has been given to prospects in the past. The college is also a large employer in our community.

Director – John Kelly – Plant Manager – DuCommun Aero Structures – John is a recent addition to the board, and was asked to join to bring manufacturing expertise to the board. Knowledge of issues ranging from workforce quality and training, transportation and shipping, utility costs and availability, etc. create the need for this voice at the table.

Director – William Mahoney – Labette Health Administrator (resigned while I was working on this) – The hospital has a huge impact on economic development, both as an industry in itself, and as a contributor to the “quality of life” issues that make Parsons a desirable community to locate your company in. Recently, Dr Welch acquired a company in Texas and relocated their jobs to Parsons, which is a perfect example of the medical community tie to Eco Devo. The improvements being made at the hospital, along with ongoing successful programs, are a large economic contributor to the community. The hospital is also a large provider of jobs to the community.

ANTIQUE POSTCARDS – Wreck on the MKT 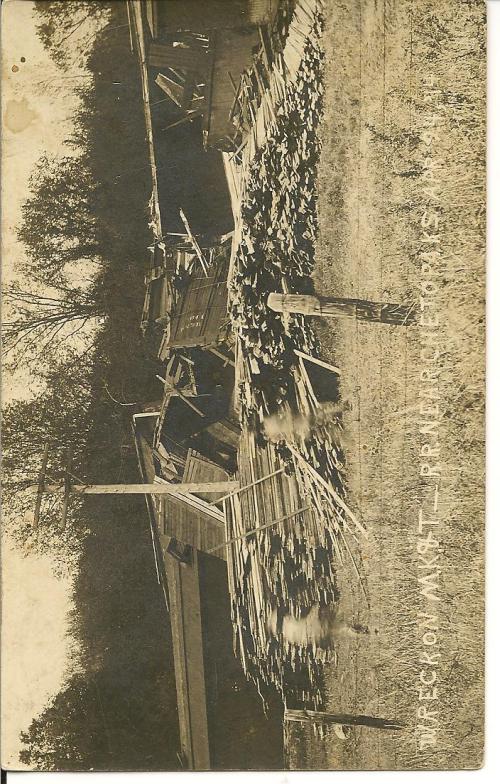 I have found no information about W.E HEADLEE. – Any historians out there? 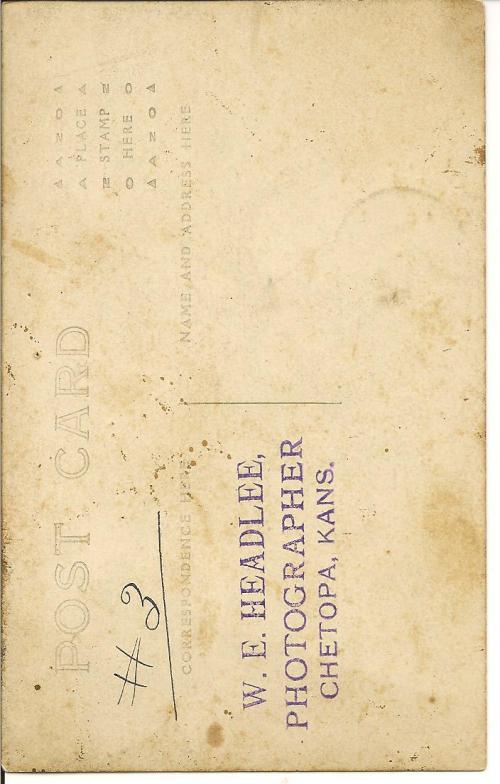