The Osage in the Four States 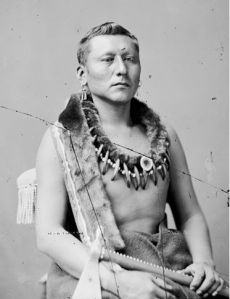 If you live in the Four-States area you are in the heart of the former Osage Indian Nation. Maybe not the most famous tribe, but arguably the most signicant in American history. Their geographical location in North America was so significant that it halted westward expansion for 125 years! Being in possesion of the major waterways of the Arkansas and Missouri rivers, along with the ancient overland route that passed through southest Kansas, it was the equivelant of possesing the crossroads of the Asian ‘Silk Road’. In fact, many historians say that had these natives not held the Spanish and French at bay, the United States probably would not exist today.

The Osage were a highly organized people who’s government structure was more than likely the model for modern western civilization’s present governments. They certainly (indirectly) brought the notion of  “Inalienable Rights” to Thomas Jefferson and the Founding Fathers.

A fierce and proud people, they were primarily hunters/warriors. They were a kind and loving Nation who valued life of all forms. Even though they were ‘civilized’, they were far from being pacifist. Any native or white man who failed to understand their rules and traditions could possibly pay with his life. Any hunting in their territory without permission would end with your head on a stake, warning poachers to follow the rules! Of course, white men saw this as savage, while at the same time hanging poachers and cattle rustlers.

Politeness to each other was paramount, and traditions were followed to the tee. The Osage saw the first white explorers as extremely rude. (Look how they spoke to each other!) They also complained that the whites smelled bad and rarely bathed. Worst of all was their common trait, GREED. One Chief was quoted as saying; “They faithfully keep the sabbath, and anything else they get their hands on!”

The Osage was not a nomadic tribe of hunters, however they did move their villages and camps as needs arose. Being in firm possession of this land made them arguably the most powerful tribe in the first 100 years of American history.

If you live in southeast Kansas, you live on, or near their village sites, which were all over the Neosho and Verdigris rivers as well as the smaller tributaries such as Labette creek. Black Dog’s clan inhabited much of SEK. In fact, towns like Chanute and Oswego, Independence and Coffeyville are on the very spots that were their villages. In the extreme southest corner, Baxter Springs was a large Indian village long before it was the first cowtown in Kansas. The trails established by the Osage eventually became the white man’s cattle trails.

Hopefully I will have time to cover more Osage history. There is so much that is not at all what we were taught in school, if any of this was mentioned at all. Seeing history from the native inhabitant’s point of view is a new experience for me.     -For other similar posts; click the TAG – Osage. OR choose the category Native American, under SEGREGATIONS on the right side-bar.

23 responses to “The Osage in the Four States”