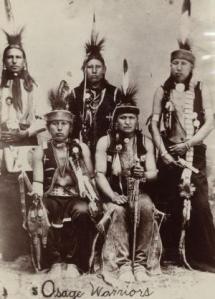 One famous Indian artist, George Catlin, stated: “The Osages have been formerly, and until quite recently, a powerful and warlike tribe: carrying all their arms fearlessly through to all these realms; and ready to cope with foes of any kind that they were liable to meet.”  And Catlin adds that he believes them “to be the tallest race of men in North America, either red or white skins; there being few indeed of the men at their full growth, who are less than six feet in stature, and very many of them six and a half, and others seven feet.”  (1834)

In 1804, President Thomas Jefferson sent for a delegation of Chiefs from the Osage Nation. Meeting with Jefferson on July 12 were twelve Chiefs and two boys who had been escorted to Washington D.C. by the military. Jefferson later wrote to the Secretary of the Navy, Robert Smith; “They were the finest men he had seen” and “the most gigantic men I have ever seen.”

Osage men carefully pulled the hairs from their faces, even their eyebrows, and shave their heads, leaving on the top a tuft of hair, which terminates in back in a pigtail. Their ears were slit by knives and grew to be large and hung rather low under the weight of large ornaments, made from beads and bones. They also tattooed their bodies, as well as wearing bracelets and neckalaces. Warriors were equipped with a lance, a shield, a bow and quiver, knife and a small axe known as a tomahawk. Is it any wonder that these huge warriors were widely feared by those first Europeans and Americans? 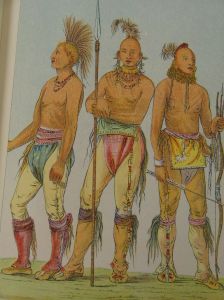 In warfare, they preferred to not resort to killing, or even violence, unless necessary. When they did kill, they showed remorse for taking life, much to the surprise of early explorers who generally misunderstood their laws and customs. When killing did happen, they often remembered the place where the incident happened with an “honor name”, such as “The place of killing ten Pawnee warriors”. A deeply religous people, they prayed several times a day faithfully, and believed in living in harmony with people and the earth. Before battles, or even before planned robberies of intruders, they would mourn the disharmony they were about to create. The mourning continued after the disharmonious events also. To avoid these events, they commonly practiced what is known as “Bluff Wars”.

A bluff war was just that, bluffing! If another tribe was thought to be encroaching on their territory, or the Osage wished to expand their own claims, they would surround the other’s village or fortifications and hurl insults, both by yelling the insults and making particularly rude hand gestures! Politeness in all things was paramount to the Osage people, and rudeness was an extremely inflammatory act. The objects of their bluffs would do well to “hunker down” and ignore these insults, as any who left the safety of their people and took the challenges, would be killed. Some tribes were completely subdued by the Osage without ever having an actual battle.

The Osage, as well as all the tribes that bordered them, knew warfare as a way of life. They were always in a state of war with each other, and this condition persisted until the early 1900’s, despite the new American government’s protests and laws against this. As eastern tribes were relocated by the Americans, they were moved onto Osage lands. I don’t wish to cover that period right now, so I’ll try to stay with the pre-American warriors and wars.

The Osage warrior was the most feared in the entire mid-west. Although in the “Western” movies, you usually hear about the dreaded Comanchees and the ruthless Souix, the truth is that those tribes were mild compared to the troubles and wars that happened in connection with the Osage. The Osage warrior was the bravest of the brave, with absolutely no regard for his own life in a battle.

An eyewitness account of the Osage warrior’s attitude and abilities comes from a Spanish “Governor”, Cruzat. During the time that the Spanish “owned” the Louisiana territory, one Osage Chief, known as “The Scar”, was lured to the Spanish Post of St. Louis. I say lured, due to the fact that they intended to arrest him, but brought him there under a flag of truce. Cruzat writes of; “The fury, wrath, and blind animosity with which he opposed his arrest.” He goes on to tell of an attempted escape by The Scar, forty days into his captivity, “Various inhabitants bear witness to his furious delerium. It became impossible to to lay hold of him without injuring him because he was like a mad dog foaming at the mouth. With the greatest barbarity he attacked any who came near to him, like a desperate person who looks not to his life.” Apparently, shortly after this he committed suicide, preferring death to imprisonment. Keep in mind that this was only one Osage man, unarmed. It took the ENTIRE garrison at St. Louis to subdue this one unarmed warrior!

A Better Man/Playing For Change

Tagged as Playing For Change

The Power Of ONE

Love is patient, love is kind. It does not envy, it does not boast, it is not proud. It is not rude, it is not self-seeking, it is not easily angered, it keeps no record of wrongs. Love does not delight in evil but rejoices with the truth. It always protects, always trusts, always hopes, always perseveres.

And now these three remain: faith, hope and love. But the greatest of these is love. 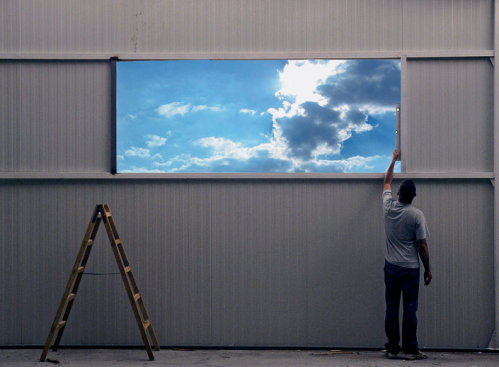 How To Be a Poet by Wendell Berry

Make a place to sit down.
Sit down. Be quiet.
You must depend upon
affection, reading, knowledge,
skill—more of each
than you have—inspiration,
work, growing older, patience,
for patience joins time
to eternity. Any readers
who like your poems,
doubt their judgment.

Breathe with unconditional breath
the unconditioned air.
Shun electric wire.
Communicate slowly. Live
a three-dimensioned life;
stay away from screens.
Stay away from anything
that obscures the place it is in.
There are no unsacred places;
there are only sacred places
and desecrated places.

Accept what comes from silence.
Make the best you can of it.
Of the little words that come
out of the silence, like prayers
prayed back to the one who prays,
make a poem that does not disturb
the silence from which it came.

Tagged as Five For Fighting, Music

In Spite Of Ourselves